What are the Differences between Mortar, Concrete, and Cement? 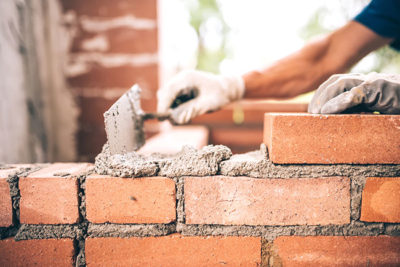 As a homeowner on a budget, you like to be involved directly in your home repairs and renovations. You want to know what’s going on so you can sleep soundly knowing you got a good deal. If you plan on getting stonework or masonry done in the near future it’s important to know the differences between mortar, concrete, and cement.

Mortar is more of a binding agent than a building block. The white material you sometimes see between bricks and other blocks in stone structures? That’s mortar. You can think of it as a very strong glue made of a mix of cement, sand, and water.

One major downside of mortar is that it weakens with age and needs to be repaired fairly often (every 25 to 50 years). Mortar is very sensitive to temperature and weather so while it’s useful in small parts to bind things together it’s rarely used as the main material in a construction project. You would end up with a pretty weak and unsafe structure.

Concrete is similar to mortar as it is also made from a mix of cement, sand, and water. The difference is that it contains less water and rocks are mixed in as well. Mixing the rocks in makes it significantly more durable than mortar and also extremely fire resistant to boot. It’s produced with less water than mortar which means it’s not as sticky, so it’s less useful as a binding agent.

You see concrete used most often to support large structures. Beams, walls and other elements of the foundation are generally made of concrete reinforced with steel rebar to give it an even longer life. Using it as a binding material isn’t recommended but as a supporting element in large construction projects it’s strength is nearly unmatched.

Cement is another binding material. As you saw above it is used to produce both mortar and concrete. In that way, it is a very fundamental element of construction. Cement can be made from a variety of inorganic material including limestone, shells, and clay. The manufacturing process of cement is extremely precise and a lot of chemical testing is done to ensure it complies with industry standards.

You wouldn’t generally use cement by itself for any kind of construction. It’s most common uses are to create other materials for use in construction. Trying to use it for anything else would most likely be a mistake and a costly one at that.

To sum things up:

Knowing the right material to use for your home improvement projects before you begin saves you both time and money. For a free cost estimate on your masonry project, contact All-Nu Construction.